(This page is deprecated)

The WordCloud Plugin is a Cytsocape plugin that generates a word tag cloud from a user-defined node selection, summarizing an attribute of choice. For instance, if selected nodes are proteins, and the string attribute "full protein name" is selected, every string will be broken down into words, which will be plotted on a panel with size proportional to their frequency. 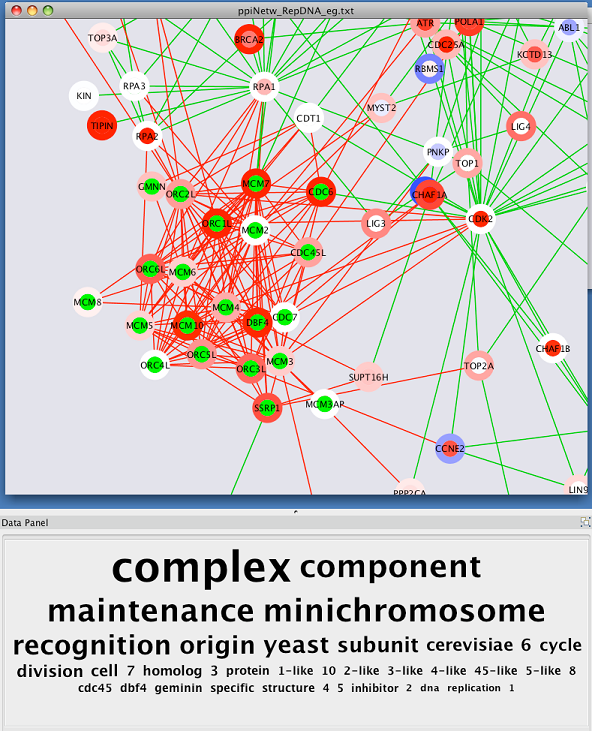 It is also possible to use the plugin to cluster words that appear together in the selected nodes. For instance, if node A has name attribute "Origin Recognition Complex 1" and node B has name attribute "Origin Recognition Complex 2", then the words "Origin", "Recognition" and "Complex" will be clustered together, following the order in which they appear. The plugin operates on any network and on any selected attributes, although it has been specifically designed for string attributes such as gene names or gene ontology annotations. 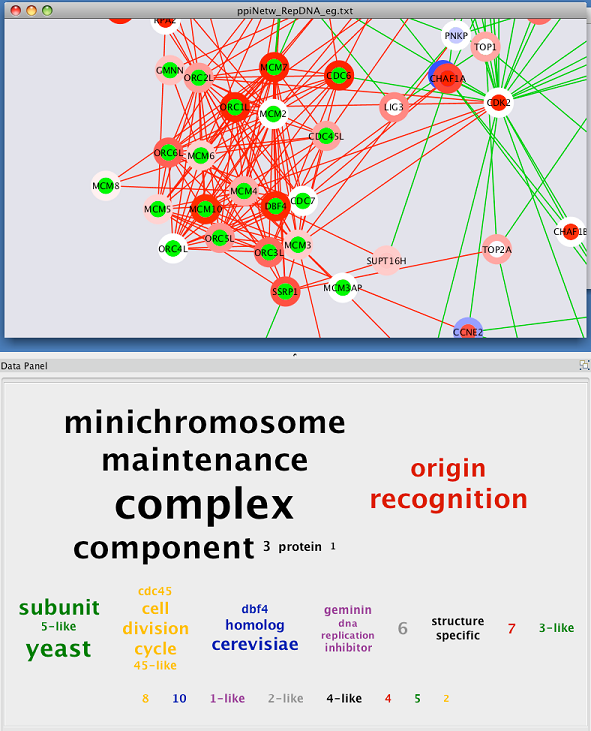 The WordCloud Plugin requires Cytoscape Version 2.6.x. If you don't have Cytoscape or have an older Version (2.5 or older), please download the latest Release from http://www.cytoscape.org/ and install it on your computer.

After loading a Cytoscape network, and selecting the nodes of interest, there are 3 locations from which you can create a word tag cloud.


You can use the parameter defaults for all of these methods for creating a word tag cloud. For a more careful choice of the parameter settings, please go to the Full User Guide.

The Attribute Choice parameter appears within the Cloud Parameters section of the Input Panel. This parameter allows a user to choose which Cytoscape attributes to build their word cloud from. A user may select a single attribute or a list of multiple attributes. The attributes currently selected can be viewed in the scrollable text box. To update the list, a user must press the "Edit" button. The available options for attributes include the node ID (the default option) and all currently available attributes of the type String or List. Notice, that for an attribute of type List, only those entries that are String will be used to build the word cloud. When changing the attributes that a cloud is built from, a user must make sure to hit the "Update" button to see the updated results for the current cloud.

The Word Aggregation Cutoff parameter appears in the Advanced portion of the Cloud Parameters section of the Input panel. This parameter is used only with cloud layouts that incorporate word clustering. Words are aggregated in such a way that their order in the cluster reflects which words appear next to each other in the selected nodes in the network. The word clusters are built by aggregating pairs of words. Specifically, the WordCloud plugin uses a greedy algorithm in combination with heirarchical clustering to create the word clusters that a user will see.

As an example, lets say that you have a network with the following 6 nodes:

A user selects all nodes in the network and creates a clustered cloud with Word Aggregation Cutoff = 3. The algorithm begins by placing each word that appears in its own cluster, and then begins the clustering process. In this example the first pair of words that will be clustered together are "programmed" and "cell" since they have the highest pair probability. Here are their associated probabilites:

P(cell | programmed) = 1 (since everytime that programmed appears, it is followed by cell)

Since, 6.0 >= our Word Aggregation Cutoff of 3, we combine these two words into a new cluster. Now, we look at our next pair of eligible words, which happens to be "cell" and "death". This pair also has a pair probability value of 6.0, so we now have a 3 word cluster containing "programmed cell death" and all other words are in their own clusters. The next word pair that comes up is " activation" and "humoral" which has a pair probability of 3.0. All other eligible pairs of words have a pair probability less than 3 (our cutoff value), so we are done clustering. The resulting cloud (with Network Normalization = 0.5) is as follows:

Since, the Word Aggregation Cutoff serves as a clustering threshold, smaller values for this parameter will usually translate to larger clusters of words. If this parameter is sufficiently large, every word will appear in its own cluster.

The Advanced portion of the Cloud Parameters section of the Input panel contains a checkbox labeled "Normalize word size using selection/network ratios". When this checkbox is not selected, the size of words in the cloud are directly proportional to their frequency in only the selected nodes. When the checkbox is selected the Network Normalization slider bar becomes visible and word size is now calculated using a weighted ratio of the word frequency in the selected nodes to its frequency in the entire network. The slider bar determines how much weight to give word frequency counts in the entire network when determining word size. Specifically, the size of any word W in a tag cloud is directly proportional to: (sel_W / sel_tot) / (net_W / net_tot)^k, where sel_W is the number of selected nodes that contain W, sel_tot is the total number of selected nodes, net_W is the number of nodes in the entire network that contain W, net_tot is the total number of nodes in the network, and k is the network normalization factor.

The Network Normalization parameter determines how much the frequency in the network down-weights the size of a word.

The default value is 0.

The Cloud Style parameter appears within the Layout portion of the Cloud Parameters section of the Input Panel. The choice of cloud layout style will affect the look and feel of the word tag cloud that appears. This is also where a user will determine if they want their word tag cloud to include clustering. Below are examples of the same word cloud with the different layout style options.

The Network View options appears within the Layout portion of the Cloud Parameters section of the Input Panel. Once a cloud has been created, selecting the "Export Cloud to Network" button will create a new network based on that cloud. The labels for each node will be a word that appears in the word tag cloud. This font size of the label and the size of the node in the network scale with the font size of the word in the tag cloud. Edges in the new network are weighted based on how likely two words are to appear next to each other in the original selection that the word tag cloud was created from.

This section also contains a checkbox. When this checkbox is selected the numbers in the range 0 - 999 will also be included in the list of words to exclude. It is important to note that this functionality will only cause these words to be excluded when they appear as separate words.

The Word Tokenization parameter allows a user to specify what characters to use as delimiters between words when analyzing a node. The plugin contains a pre-populated list of commonly used delimiters that contains all space and punctuation characters. These delimeters appear under the heading "--Common Delimiters--" in the drop down boxes. A user can add or remove any of these delimeters from use in word tokenization.

If a user wishes to add to the list for word tokenization a delimeter that is not already contained in the list of options, they should should expand the Add Delimiter drop down box and under the heading "--User Defined--" select the choice "Select to add your own" and press the Add button. This will bring up a popup screen that will allow a user to add their own Word Tokenization delimeter.

The Word Stemming parameter section allows a user to enable a standard word stemming algorithm (the Porter Stemming Algorithm - http://tartarus.org/~martin/PorterStemmer/) to map all words to their root word stem. The only choice for a user in this section is to either enable or disable stemming to be used.

1. Cloud List - A list of all clouds that exist for the current network. If no network is currently selected, then this section will display "No Network Loaded". A cloud can be renamed by selecting the cloud in the list, right clicking on the mouse and selecting "Edit Cloud Name". No two clouds for the same network can have the same name. By default the clouds will be named using sequential numbering.

2. Attribute Choice - Allows the user to specify which attributes to use when building the word cloud.

3. Advanced - User can specify the maximum number of words to display in the word cloud, as well as Word Aggregation Cutoff and the Network Normalization.

4. Cloud Layout - The user has a choice of serveral different styles for the layout of the word tag cloud. This is where a user will select whether or not they want to see a layout that includes clustering. A user can also export a cloud to a network here.

5. Word Exclusion List - A user can add or remove words to be ignored when building the word cloud. The list of words to filter out is applicable at the network level. Hence, any words added or removed while a particular cloud is selected in the cloud list will affect all future clouds created or updated from the network associated with that cloud.

6. Word Tokenization - A user can add or remove characters to be used as delimiters when tokenizing the words that appear in the tag cloud. The list of delimiters is applicable at the network level. Hence, any delimiters added or removed while a particular cloud is selected in the cloud list will affect all future clouds created or updated from the network associated with that cloud.

7. Word Stemming - A user can choose to enable stemming which will map all words appearing in the tag cloud to their root stem using the Porter Stemming Algorithm.